The BBC and the World Cup

Good news! I was lucky enough to create several 2018 FIFA World Cup images for BBC Sport. These pics get posted online when they become relevant (sort of).

On the downside, the two images posted so far are tragic reminders that you can't always predict the winners.

The first one is "King Salah"; a depiction of Mohammed Salah taking his place as one of the world's top three football players currently, much to the annoyance of the other two: Lionel Messi and Cristiano Ronaldo. Of course the image may still hold true, however neither Salah nor Lionel Messi have had a great tournament to say the least, with Egypt most definitely out and Argentina on the brink. 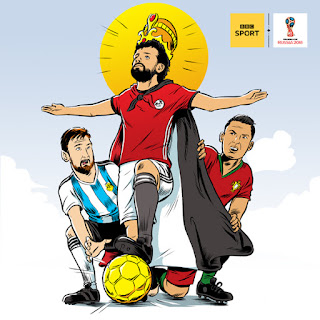 Salah takes centre stage, Messi trying to reach a golden ball
from under Salah's boot. Made sense when I drew it.
Here's a link to the BBC Sport post on Instagram: MO SALAH 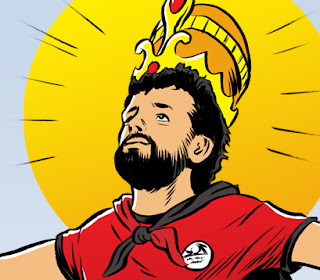 Salah has been given the "Egyptian King" moniker by
Liverpool fans (Salah plays for Liverpool). ...Hence the crown.
At least he scored a penalty against hosts Russia.

Moving on to the second image, which depicts Lionel Messi carrying the squad through the tournament. This could still be a thing if Argentina can beat Nigeria and if Iceland can win against Croatia. I hope I've got that right. 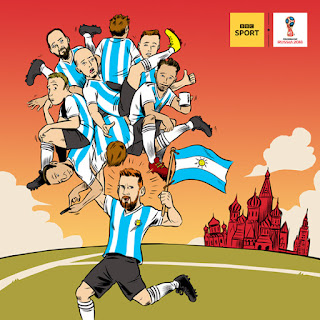 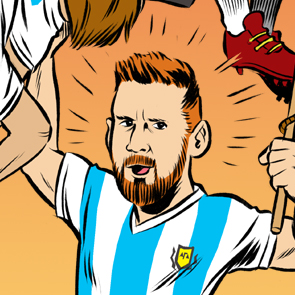 Here's a close-up! Perhaps I'll end up making one
of these for England and Harry Kane