Alice and the Invaders, front cover!

The time has come to put a cover all up on this thing!

Essentially a summing up of "Alice and the Invaders From Wonderland" issue #1, a large part of which is set in the woods where our heroes go up against some vicious "Bandersnaches." Alice's action pose was something sketched several years ago, which author Bret M. Herholz dug out and suggested for a cover. I came up with the idea of adding the rest of the crew. Framing from inside the creature's mouth was a last minute thing, just to fill the top and bottom of the page.

Remember that bit in Jaws III where the camera is in the shark's mouth, looking out? Nope? Oh c'mon! Well, I won't force you to go through that shit again. 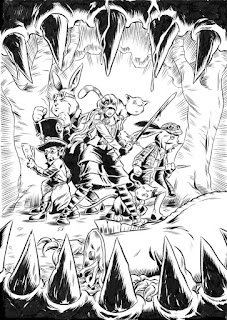 This is the original, which exists on paper,
in a drawer, in the shed ...on planet Earth,
somewhere in the universe. 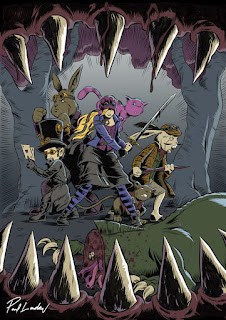 Colour, based on the interior scene in question
but brightened up. For reasons that felt logical. 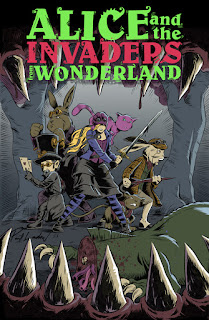 The text, also dug out from years ago,
still works. Final one is cropped from the
bottom. But that's my contribution done!