I doodled over a fiver as part of a project called "fiversforartistic". Why? Not entirely sure, but I was approached to do so and some really famous artists were also in on this.

"The aim of “FIVERSFORARTISTIC” is to collect 200 old fivers and convince important contemporary artists to sign and then decorate the fiver in any way they wish making the note completely original. Artistic will then auction the collection of fivers to raise enough money to launch Artistic as a CIO charity. We have had a great response so far  from some amazing artists ranging from Peter Blake to Mason Storm and the wonderful duos of Gilbert and George and the Chapman Brothers. We have now collected 57 completed fivers but we desperately need more . Where is the BANKSY fiver ? We have a wonderful note from the incredibly lovely Damien Hirst. Come on let’s make this happen in 2018 ? We know it can be done!" 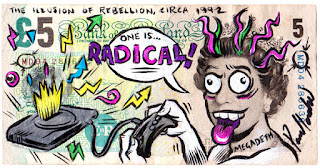 On the £5 note I received, I noticed the letters "MD" - if you look closely you can see MD circled on the note itself. Now consider the following: I'm a fan of the Sega Megadrive (or Genesis if you're in the US) often, particularly in Japan, abbreviated to "MD". I am also a fan of thrash band Megadeth.

So I decided to aim for an early 90s "radical" queen. There is something deeper here though: the reduction and distillation of the 60s counter cultural rebellion into marketing tools geared solely towards making money. Hence rebellion as "illusion" rather than as reality.