Illustrating the Poetry of Belinda Bradley

I was commissioned by Belinda for this event back in 2010, along with fellow illustrator Robin Clare who illustrated one or two of Belinda's other poems. (All illustrations below are by me.) 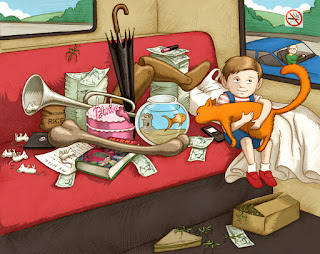 
A Barbie birthday cake,
a “Nobody Likes Me” CD
by Alice Cooper,
a Misty Pink lipstick,
thirteen stick insects,
a mouldy cheese sandwich,
a goldfish named Slurpy,
a Nokia 1208 mobile phone,
a 2 year old,
a silver trombone,
a dinosaur bone,
a packet of brown rice,
six dead mice, white,
a “Kiss” wedding dress,
a prosthetic leg,
a last will and testament,
a copy of “Harry Potter
and the Philosopher’s Stone,”
£30,000 in used bank notes,
a black brolly,
a cat called Holly.
............ 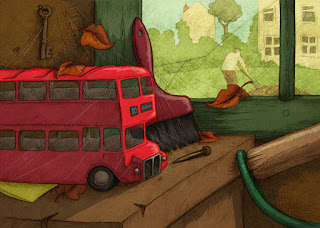 I Remember (by Belinda Bradley)


I remember...
the bus
red,
covered in cobwebs
in the garden shed.

I remember....
the blossom


daisies
on the olive sink.


I remember ……
my ragdoll
blue,
school shoes
shiny and new.

I remember ……
the white swans
on the wall,
threadbare carpet
in the narrow hall.

I remember……
my grandma
calling a dress “a frock,”
and saying
“you are soppy” a lot.

I remember……
ballet lessons
and tap,
looking in the mirrors
thinking I looked fat.

I remember……
the first time I was alone
with a boy in my room,
my dad asking
“is he going home soon?” 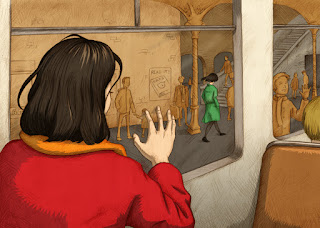 Through the window of the Manchester train  (by Belinda Bradley)


I watched her walk away,
a nondescript figure
on an empty platform.
I saw her sure-footed steps
as we sped past,
watched the draft lift
my sister’s thick brown hair.
Her lasting impression
fossilised in the changeable air.

Here is the main site... http://www.contrastcreative.co.uk/

....I thought it was time to share these with you.

Sketches like this were added to a simple template provided by
Contrast Creative before approval.

﻿
Once approved, I coloured my sketches digitally,
added a couple of gradients and tweaks. Contrast
Creative then added them to a more accurate template
complete with slogan and in the case of the above
example, a more exaggerated blur effect.