It's a blisteringly hot summer and England are smashing their way through the World Cup. Like planets in alignment (which presumably are not usually aligned) this is nice, rare and people seem to be pleased.

I feel like I am now playing a very small part in this national fervour; I was hired by BBC Sport again - this time to create a bombastic image of England as they clambered dramatically into the quarter finals.

Commissioning of the image was dependent on England beating Columbia in the last 16, so I had a lot riding on that game. ...Yes, for the usual reasons; I need the work, I need the exposure, but it was more than that. I was gripped and I wanted England to win, just as I want them to beat Croatia in the semi final. This is like 1990 again, a rap is needed, someone wheel out New Order!

So for any fellow illustrators out there, or anyone interested in the process, here goes... 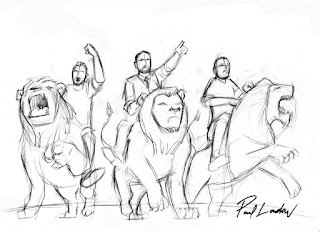 I was asked to depict Harry Kane, Gareth Southgate
and Jordan Pickford, riding lions. The background
was not really envisioned by this point, so I'd get to that later. First thing
was this sketch. ^ 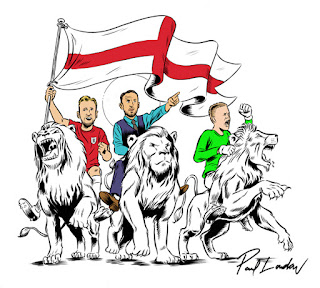 The nice folks at BBC Sport suggested they should look
as if going into battle, which is why alongside adding the England
banner, my original "happy" Harry Kane head had to be ditched... 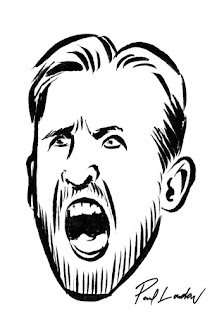 In favour of this one! For the record, drawn by hand, scanned
and then photoshopped into place. Despite the extra time taken,
I fully agree with the change.

I'm also not a massive football nut, "Kane" is still totally
the bad guy from Robocop 2. 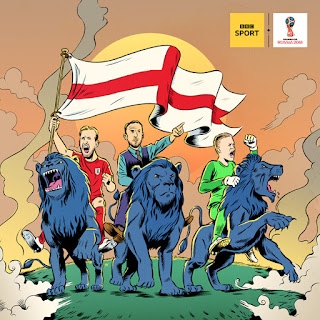 That's the final square-format version. you can see it
on the BBC Sport Instagram HERE 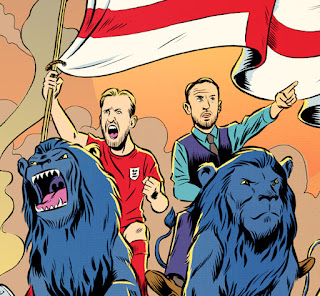 Here's a close up. Big heads retain a cartoon, caricature "carry on" vibe.
Well otherwise it's all snarls, war and plumes of smoke, got to have a bit of fun.
Plus it gives me more canvas space to get the looks right. 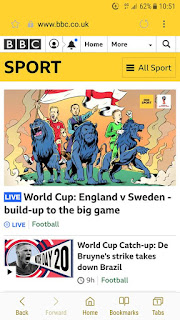 Here's a snapshot of the BBC Sport England V Sweden
live web thing. That's the 16x9 version of the image.