Remember school books? Usually they were boring and occasionally stank of fish for some reason. The ones I was involved with, not so much. Back in 2009 I co-illustrated a series of books-for-schools entitled "Dangerous Games."

The concept behind the book is best illustrated by quoting from Rising Stars UK (those who hired me):


"This exciting range of adventure stories features a trio of computer games
designers testing out their work for real, entering new virtual worlds and
encountering exciting and sometimes deadly situations."

Essentially it was my job to illustrate those scenes which take place in the real world, whilst another artist, Rob Lenihan provided the artwork for the more colourful virtual world. 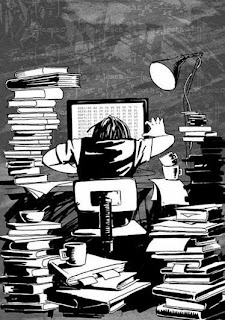 The idea behind the series is to get "reluctant readers" into books via the approach of both video games as a subject matter and a comic book stylistic approach. Probably would have worked for me when I was at school and all I could think about was going home to play on my ZX Spectrum or Sega Megadrive (depending on what year it was).

Skip forward to 2012 and the prospect of illustrating a second series was thrown my way. Of course I said yes! By 2012, I was into using brushes rather than pens to create my lines. See if you can see a difference between the image above and those below. Just for the record, I used (and continue to use) a "Pentel Color Brush." Larger black areas were usually filled in with a black marker, whilst for straight lines I opted for a the classic, cheap Berol Fine. Backgrounds were achieved by scanning in some painted sheets of paper (the same two or three repeated throughout the books.) Compiled in Photoshop. 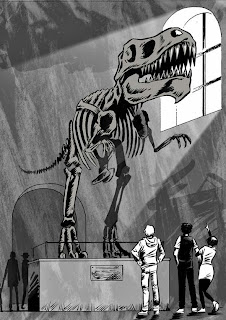 Who needs a TV when you've got T-Rex?
The plucky trio go to a museum to inspire a video game. 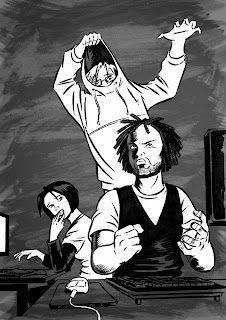 Fun and frolics in the office with Tom, Sima and Kojo. 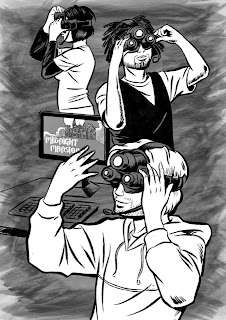 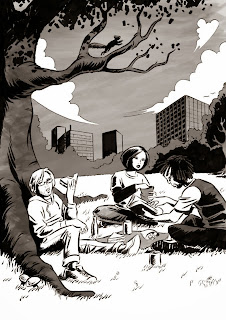 Making video games is no picnic, oh wait, it is!

I massively enjoyed the project. I was given clear instruction and yet, the freedom to employ my preferred style, which I would later go on to employ for the Long Division With Remainders project. If you are in education go and order these books today!! ...Tell 'em I sent ya.