How I got Started in Illustration - Part 3

I'm gonna make this post really short...because life is short; less talking, more doing I say! My first real commission was a children's book entitled Matthew and the Money tree. It can still be found on such websites as Amazon ---> right here. 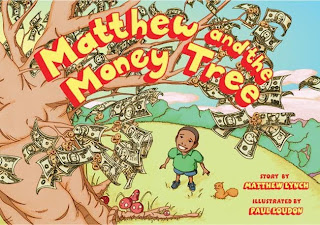 The cover is still the most epic aspect about the book.

I got the job through a site called "Elance" ...it's one of those bid-for-projects sites in which talented people under-cut each other ensuring that few people get paid what they're worth and where non-discerning clients get said work very cheaply. Those were dark times and I usually begrudge such sites even though I am in the unfortunate position of crawling back to them once more despite bigger projects since my first commission. Odesk is another such site. You "could" say they are useful for those starting out, at a push. As an artist with moderate success, I find such sites a pain in the arse; whereas students from the Philippines probably have some financial success out of them. Suffice to say, my fee for Matthew and the Money Tree was small.

This is one of the better pages.

The work was fraught with other problems too, namely a lack of consistency in my drawings. I remember that after finishing the book, I had to go back and visit each page and create new heads for "Matthew" because he looked different from page to page. This was a lack of experience on my part in creating anything sequential. What I should have done was create "style sheets" from which to draw reference.

One such page I had to re-visit for head-swapping.

Despite my problems with inexperience and the sheer disheartening workload of the book, I am glad I did it. Better things were to come... by which I do not entirely mean nightclub flyers such as this one: 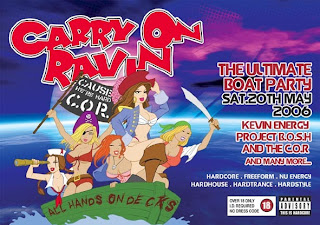 Apparently they all died of scurvy.


I was also in a design "collective." ...I did that drawing of women in a boat whilst someone else did the design work. I will always be eternally grateful for such opportunities but boy does the drawing make me cringe.
Posted by Paul Loudon at 17:39