Another Bloody Drawing of Bruce Lee

Every artist and his dog seem to draw Bruce Lee at some point; the internet is awash with pencilled or airbrushed pics of the guy and it's a mixed bag. So it was some retisence that I finally cracked and had a go. 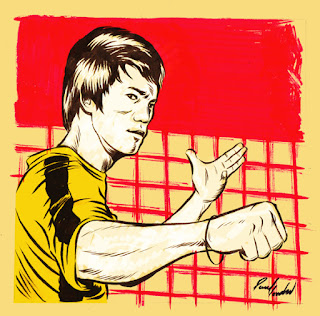 Bruce Lee is still the definitive martial arts movie icon. He lived from 1940 to 1973 and was the founder of Jeet Kune Do (or, Way of the Intercepting Fist), which is a form of emtpy hand combat derived partly from Wing Chun. Although a child actor in Hong Kong, he only starred in four completed "kung-fu" movies. Game of Death was only partly shot when Bruce died at just 33 years old.

The yellow jumpsuit worn by Bruce for Game of Death has become something of an icon in it's own right and was more recently mimicked in the outfit worn by Uma Therman in Kill Bill.
Posted by Paul Loudon at 13:22