Paragraph Magazine with a Super Vibe

Towards the end of last year, I was asked to create the cover of "Paragraph Magazine." It is described as "A quarterly, award nominated magazine for Sappi employees across Europe." The publishing house is John Brown who also produce magazine for Waitrose, SKY, RBS and John Lewis ...not exactly lightweights!

This was one of those glorious commissions where the client knew of my penchant for all things comic and had something in mind of that vibe. ...With psuedo, robotic gremlins thrown into the mix.

The final cover went through some minor revisions, such as colour changes and deleting a gremlin or two. However, I do prefer my original version. Enjoy... 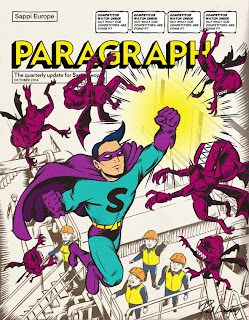 Smash those gremlins Sappi Man! (that's
what the "S" stands for).
Posted by Paul Loudon at 16:22