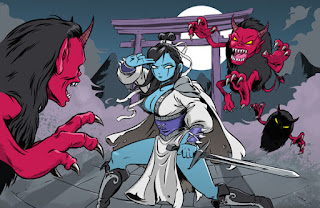 I created the above for "Heretic Xenobiotics" which I gather is a sports supplement for people who workout and want to reduce estrogen levels. I don't know much more about it, because I have no links. However, the brief was to create a witch character in the vein of a Hong Kong fantasy movie... something like A Chinese Ghost Story or Zu: Warriors from the Magic Mountain.

Fans will know what I'm talking about, and non-fans? Shame on you, now get on the internet and order yourself some HK cinema right now, you uncultured swines!
Posted by Paul Loudon at 12:45 No comments:

About 14 years ago I created an image of perhaps THE two quintessential muscle-bound 80's cartoon heroes locked in mortal arm-wrestle. He-Man and Lion-O from Masters of the Universe and Thundercats respectively, the two other characters are of course Mumm-Ra and Skeletor.

Last week I updated it with a new version. This update was created for a client, his version is coloured by hand. However I did a sneaky black and white scan pre-colour. 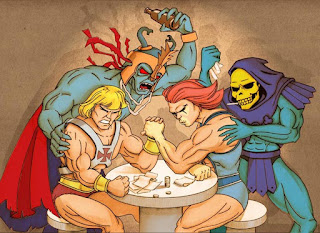 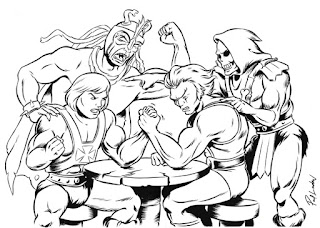 Between the creation of these two images I adopted a different style (in approx 2010); I am now all about the brushes and ink, whereas the first one was all pens and Photoshop. The first one was carefully compiled digitally from at least three different drawings, whilst the second was created all in one go. This change really reflects my current ethos too; just get it on paper and don't faff around with it too much.

Immediacy over tediacy? (Okay tediacy is not a word). Post-haste rather than fix it "in post".

Incidentally I'm not really a big Mumm-Ra fan. He functions as the "straight" villain next to the tomfoolery of the Mutants, but that's about it; functional. Skeletor on the other hand is just great; always entertaining, always a laugh. Just try watching the Filmation series, Alan Oppenheimer deserves a star in Hollywood. Donald Trump has one for Christ's sake.